A comedy of "corporate" proportions. 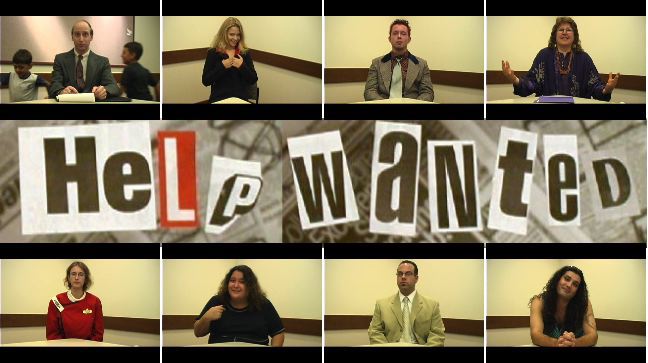 This is my very first production. It is an 8 minute short comedy filmed in Saratoga Springs, NY. I was VERY happy with the way it turned out.

Shawn Schaffer has encountered the curse of type-casting with the role of the Young Man. Everyone who has seen Help Wanted now refers to Shawn as Slacker. Not Shawn, but, "Hey, Slacker!" Shawn just grins and bears it like a trooper.

The worst part of this production happened after it was shot, edited, distributed to the actors and shown to the public. The bane of Help Wanted turned out to be Nicole Signore's underwear. Not the actual pair she wore to the shoot but the pair she holds up as Alyssa's resume. Every time it's shown Nicole says someone always comes up to her and comments on how big the undies are.

Now keep in mind that I'm a guy and never bought a pair of women's lingerie before and there I was at the local Kmart a few days before shooting standing in the womens' underwear section. I did not want to be there but knew that for the good of the film I needed to just be a man and buy the thongs. I stood before this wall of panties trying to choose which color to get when all of a sudden I hear *chomp chomp chomp* next to me. I looked down to my side and I see this little girl chewing a face full of chewing gum staring up at me. Now I felt really creepy. I felt like telling the kid to buzz off but I just grabbed a pair of size 6 T-backs and got out of there ASAP.

Ethan Sinclair had a bit of trouble finding the library. Thinking it was in an old location and not knowing of the present one, he had to walk all over Saratoga Springs and ask people where the library was while wearing his transvestite makeup and glitter.